Complete our enquiry form or call during business hours to have your termite Jacobs Well or pest control Jacobs Well needs attended.

Did you know this about Jacobs Well

Jacobs Well is a suburb in Gold Coast that is located on the delta of the Pimpama River at the southern tip of Moreton Bay. According to the suburb's 2016 census, there are about 1800 people residing in Jacobs Well. This suburb is well known for its four-lane boat ramp, the Volunteer Marine Rescue Facility, and the sugar cane fields that can be found around Jacobs Well.

To the north, Jacobs Well is bounded by Steiglitz. To the east, it is bounded by neighbouring Moreton Bay. Drive due south and you'll get to the Pimpama River, and if you drive due west, you will get to Norwell.

In the late 1800s, the farming district located between the Pimpama River and the Logan River called Pimpama Island and encompasses the modern localities of Jacobs Well, Norwell, Steiglitz and Woongoolba. It was referred to as an island because there were a number of lagoons and swamps that isolated the area during the wet season; however, this disadvantage made it good land for growing sugar cane.

Jacobs Well offers many amenities for the boating and fishing enthuasiast. It has a sandy beach facing Moreton Bay, with an enclosed swimming area, barbeque facilities and a well stocked fishing tackle & bait shop; a four-lane boat ramp, pontoon, parking for cars with trailers, and camping ground.

Calypso Bay is a canal estate at the south end of Jacobs Well. Established via the use of a converted sand mining lease, the surrounding mangrove tidal land was turned into a canal estate by using sand from the creation of the canals. The area remains surrounded by a largely pristine natural environment, providing a habitat for native birds and wildlife & and continues to be an important marine sanctuary. Calypso Bay offers range of waterfront homesites with direct boating access to The Broadwater and Moreton Bay. The GFC slowed the development of the site, with stages of land release ongoing. A promised golf course is still in the planning stage. The marina is operational, though not developed to its final stage yet. An Irish themed family pub, Harrigan's Drift Inn, offers great food, entertainment and caters for weddings and function.

Jacobs Well is a great place, filled with trees, and that should be a good thing if not for the fact that termites like living near them to crash your homes and do significant damage. To get rid of termite and pest damage in Jacobs Well, call on CTS Termite and Pest Control. 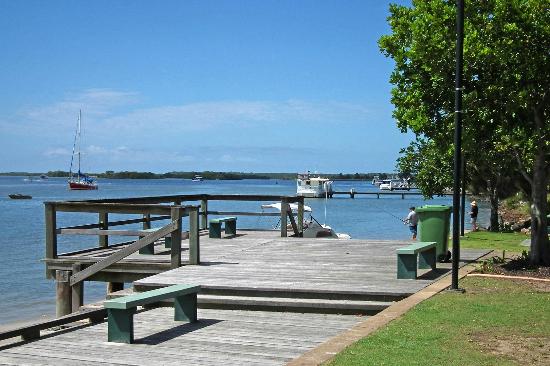